Greenock is a town & administrative centre in the Inverclyde area in the West of Scotland, just west of Glasgow and a former burgh with in the historic county of Renfrewshire. Situated in the west Lowlands of Scotland, it forms part of an urban area with Gourock further west and Port Glasgow lying further east.

The UK Census of 2011 indicated that Greenock had a civil population of 44,248, a decrease from the 46,861 recorded in the 2001 UK Census. It is situated on the southern bank of the River Clyde by the “Tail of the Bank” where the River Clyde opens in to the Firth of Clyde. 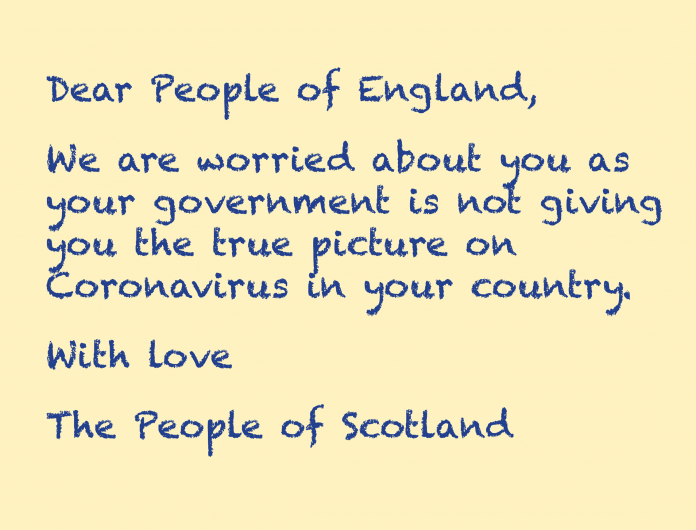 We are worried about you. Your government is not giving you the true picture on the Covid-19 pandemic in your country. People in Leicester were surprised by the sudden new lockdown when they understood that the virus was in retreat. The local authority had not been given the complete picture because Pillar 2 data was not being made available by the Boris Johnson government, so they had insufficient understanding of the actual situation in Leicester.

“The UK government’s published numbers of new cases at local authority level only include pillar 1 and not pillar 2 cases, meaning as many as 90% of new cases are missing from the data.”

The fatality rate in England from Covid-19 is 24.4% compared to 15.69% in Scotland. England’s fatality rate is the highest in the developed world and almost as bad as the situation in war torn Yemen with a fatality rate of 26.94%.

Please people of England do everything to protect yourselves, wear a mask, keep distances and tell your government you expect them to do much much better.

The People of Scotland

This article “Dear England” was first shown on this site.

We trust you found the article above useful and/or of interest. Similar content can be found on our blog .
Let me have your feedback in the comments section below.
Let us know what subjects we should cover for you in the future.