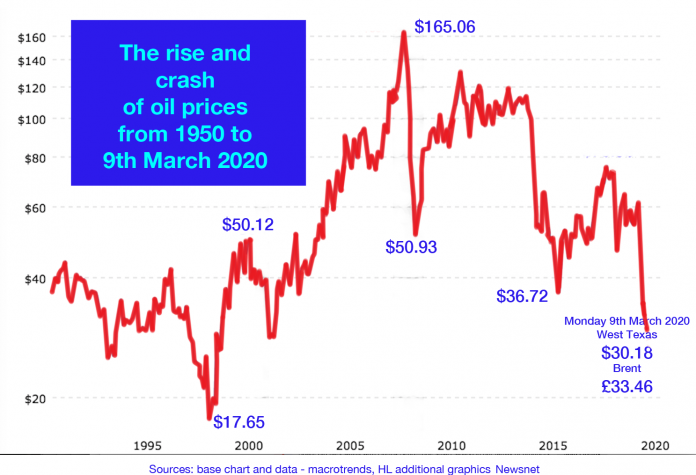 With major disruption to travel and therefore airline, transport and logistics companies fuel spend decline due to the Covid19 virus, markets opened on Monday morning in near fire sale mode. The attempt last week by OPEC to agree a production cut with Russia to stabilise oil prices hit the buffers – giving rise to Saudi action discounting the oil price, thus furthering market disruption.

Russia did not want to be seen as the junior player in the partnership and instead decided to target US shale production, calculating a lower price would put many of the highly indebted shale companies in the US out of business. The US is currently a major oil and gas producer with a surplus for export, helping with US issues over their unhealthy trade balance. Many are small players and their junk bond debt took a pummelling in Monday’s continuing market crash. That no doubt put a smile on Putin’s face. Less good news was the fall in the value of the ruble to its lowest level since 2016 which will have an impact on the Russian economy though is offset by the fact oil and gas is priced in US dollars – meaning more exports therefore more rubles for every sale to the West. As the cost of production is in rubles that is a Putin win win.

Putin has been pushing back against US sanctions and opposition to the Nord2 gas pipeline from Russia to Germany. Main Swiss contractor Allseas was forced to halt completion of the pipeline when faced with US sanctions. State owned Gazprom has said it will go ahead and complete the pipeline.

The US claims it has been acting in Europe’s interest to prevent over reliance on Russian fuel imports. Trump’s America First ravings suggest otherwise. Europe knows it needs different sources of supply to deny Russia undue influence, but growing two way trade is in the interest of both, whatever the US thinks. Russia, like the Middle East, is on our doorstep – not America’s. Europe needs a more proactive Europe First approach to counter US and Russian power plays. Dialogue and trade have mutual advantage for Europe. The Germans are furious over US interference.

Saudi Arabia not so stable

Next the Saudis decided if Russia would not play with their football they would kick back against all other oil producers, including Russia, by slashing prices and increasing Saudi production. This does not happen until April as oil production is hedged and forward sold, meaning the collapse in oil and gas prices have yet to work through to the pump and our fuel bills.

As it is US shale producers who are most at risk, the Saudi strategy has shifted to supporting Putin’s energy power play. There are very strong links between the US and Saudi Arabia. So far Trump has blamed the price collapse on the Russian/Saudi dispute whilst welcoming lower prices for US consumers. As the economic impact on US oil and gas production ratches up expect the Saudis to come in for Trump Twitter lashings.

The low cost of Saudi production can withstand a massive price cut as this game plays out, but this is not true for the Saudi budget which depends on oil revenues to keep its population suppressed whilst handing on some of the oil gains to an increasingly disenfranchised population. Fragmentation of alliances across the Middle East keep the power games in ever increasing turmoil.

Where does this leave the UK

Expect plenty on how Scotland will be hit as the major oil and gas producer in the UK continental shelf, implying independence is even more unaffordable. This is not true and prices will recover as is the way with sharp market drops. Due to the implications of Covid19 this may take a while yet, but the bargain hunters are already buying up oil stocks. We can expect more consolidation with small operators in the North Sea bought up by the larger players if they are not carrying a pile of debt.

Meanwhile this gives room for the much forecast increase in fuel duty in the budget. As every litre carries 58p of duty with 20% Vat on top, this will hit consumers, especially in rural areas. If the price at the pump is £1.25 a litre, the fuel cost is around 46p, fuel duty 58p, and VAT 21p, giving a total tax take of 69p, representing a tax rate of 155% on the actual fuel cost at the pump.

Hints of tax increases are often designed to create relief when they don’t happen with the purpose of making us think the Chancellor is being good to us by not increasing the total tax rate to 160 or 170%.

We must not underestimate the impact of the oil price collapse on winning increased support for independence. Current events and short-term to medium-term market volatility make people more disinclined for change. Our challenge to to show independence is the safer option rather than the Johnson government’s dangerous attempt to go for broke on an unrealistic global play when the UK is a minnow today on the international scene.

Scotland can expect influence in Europe and in return gain influence as part of the world’s largest trading block. That influence and market power is what Putin and Trump want to damage. Steering our way through Scotland’s power endgame is complex, much more complex than impatient independence supporters are willing to recognise. It is a bit like a three tier chess board and strategy must allow for knocks and complications along the way.

No Deal crash out looks to be almost unavoidable

Power, influence and control in the real world