Greenock is an administrative centre and town, part of the Inverclyde region in Scotland, forty miles west of Glasgow & a former burgh located in the county of Renfrewshire. Situated in the central Lowlands of Scotland, it forms part of a continuous urban area with Gourock further west and Port Glasgow to the east.

The UK Census of 2011 indicated that Greenock had a population was 44,248, which was lower than the 46,861 returned during the 2001 UK Census. It lies on the south shores of the Clyde by the “Tail of the Bank” close to where the Clyde expands in to the Firth of Clyde. 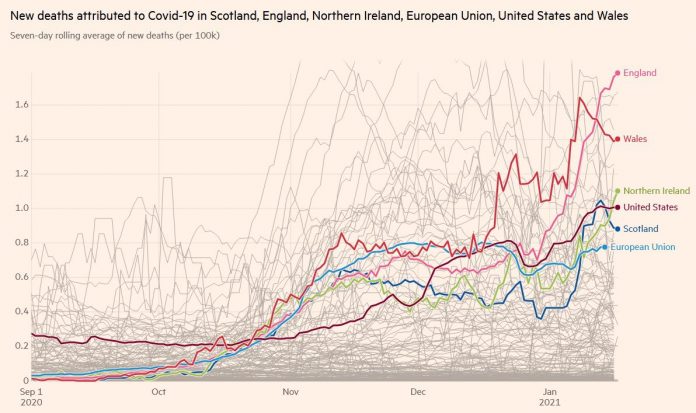 First Minister Nicola Sturgeon recently said in Holyrood and in interviews that the rollout of the vaccines, initially one, then two and now three, was a race – a race against getting as many at risk and vulnerable people as possible vaccinated against the existing and new, vastly more infectious variant of the Covid19 virus. It was never seen as a race against England, Wales, Northern Ireland, or any other country, but a race against the virus itself using all the resources at Holyrood and NHS Scotland’s disposal.

Yet the UK government and Scottish Tories have decided to make the rollout a race, competition to prove that the devolved administration can’t achieve without the broad shoulders and deep pockets of Westminster. To do this they have derided the efforts of the Scottish and Welsh Governments, pointing to lower numbers vaccinated as a percentage of population, whilst they have run with vaccinating the low-hanging fruit – the easiest people – to ramp up the numbers so they can crow about their success.

Nevertheless In Scotland 5.2% of the population has received a first dose whilst London, where vaccinations should be easier to achieve, has only managed to vaccinate 4.3% of its population.

Stewart McDonald MP has asked Facebook and Twitter to take action against new secretive campaign group ScotlandVaxFACTS as it’s spreading “disinformation and misinformation” about the Scottish Government’s Covid vaccine rollout. A Manchester-based PR Marketing & Communications manager who previously worked with the LibDems is behind the new group which McDonald said has all the “hallmarks of a political Astroturf disinformation venture”.

Unlike NHS England, Scotland is prioritising its vaccine rollout according to the JCVI (Joint Committee on Vaccination and Immunisation) guidelines – with care home residents and staff the number one priority. A slower method for sure due to the logistics but one that reduces deaths, even with only the first vaccination. Immunising 1000 people who are unlikely to succumb to the disease is less effective than immunising 500 who are.

“We made a deliberate decision, in line with JCVI advice, to focus firstly on elderly care home residents, because we know they have the greatest vulnerability to becoming ill and dying from this virus. Making sure this group benefits from the protection of the vaccine as quickly as possible is likely to have the biggest and most immediate impact on saving lives. However, vaccinating in care homes, for obvious reasons, is more time-consuming and labour-intensive than doing so in the community. This is why overall figures are, at this stage, lower than in England – where more over-80s, generally, but a lower proportion of care home residents, have so far received the vaccine.”

The Guardian is reporting that deaths in care homes in England have hit the highest level since mid-May, with a 46% jump in coronavirus-related deaths in the past week. In the week to last Friday, 1,260 Covid19 related deaths were reported to the Care Quality Commission, up from 824 and 661 in the previous two weeks. This vulnerability of those in care homes is exactly why the Scottish Government is following JCVI guidleines in rolling out vaccines to care home residents as a priority.

The Guardian is also reporting that, “the [UK] government has acted to help care homes accept Covid-positive patients from crowded hospitals by underwriting the risk posed by them spreading the virus.” Apparently, “Insurers were refusing to cover care homes offering to become “designated settings” for discharged Covid patients – also known as “hot homes” – which have been set up in some areas to try to keep infection out of other care settings. Until the end of March those homes will now be covered by the UK government for clinical negligence and employer’s and public liability where they cannot obtain commercial cover.”

How well does this sit with NHS England not prioritising vaccinations for care home residents? Deaths could well increase rather than reduce as the Scottish, and JCVI approach is designed to achieve. This is prompting questions of whether England has prioritised high rollout numbers over the horrendous –

death rate 1507 in England according to the latest figures compared to 71 in Scotland with 30,371 new cases of infection in England and 1106 in Scotland.

Progress is also being made in vaccinating the over 80s. with between 15% and 20% already having had the first dose. The First Minister said they were on track for all over-80s and everyone in JCVI groups 1 & 2 to have been offered the first dose by the start of February, and by the middle of February the first doses for all over 70s and for all those who are deemed to be clinically extremely vulnerable should have been completed.

First doses for the over 65s should be completed by the beginning of March, with everyone on the JCVI priority list receiving their first doses by early May. So in around three months’ time, approximately 3 million people will have received at least the first dose of vaccine. This is the majority of the adult population and includes everyone over 50 and many younger people with underlying health conditions. The rest of the adult population will follow after that as quickly as supplies allow.

The vaccine supplies of course come via the UK government. When the Scottish Government published, at the behest of Scottish Tories, their document detailing expected supply of the vaccines now and into the future, the UK Government had what the First Minister described as “something of a hissy fit” and insisted the document was taken down from the Scottish Government website as it insisted it breached supplier confidentiality. “At the same time,” said the First Minister, “Tories are briefing and spinning misleading figures on supply to slam Scotland’s vaccine rollout. Supplies are allocated to Scotland and are then drawn down and we vaccinate as quickly as we possibly can.”

Over 100,000 people a week now being vaccinated in Scotland, and that number is expected increase from now on and, assuming the expected supplies of the vaccine are received, 400,000 people a week should be vaccinated by the end of February. Some GPs and others in both England and Scotland are complaining that supplies are patchy. Vaccine manufacturers are under enormous pressure to supply to very many countries. Pfizer is moving its manufacturing to a different plant in order to increase production so supplies of its vaccine will be interrupted for a brief period until the new plant comes on-stream. This is making prediction for rollout even more difficult.

Even with vaccination we are not out of the woods as there will still be a second dose to be administered and the vaccine takes some time before giving protection – a protection that isn’t 100% so masks, social distancing and regular hand washing and sanitising will remain necessary. But we will get there and our lives will gradually become less isolated. As the First Minister says, there is now light at the end of the tunnel.

This article “The race to save lives in Scotland” was initially shown on this site.

We hope that you found the above of help or of interest. Similar content can be found on our main websitewebsite .
Please let me have your feedback below in the comments section.
Let us know which subjects we should write about for you in the future.